To share your memory on the wall of Georgia Halasey, sign in using one of the following options:

She was born November 10, 1940 in East St. Louis, Illinois, the daughter of the late George and Irene (Rampenthal) McAdams. She married Michael P. Halasey on September 21, 1963. He preceded her in death in 2010. She was also preceded in death by, brothers-in-law Joseph Beljanski, Bill Caraway, Ed Gregorich, and Deacon Halasey as well as sister-in-law Eileen Halasey.

Georgia was a homemaker. She also owned and operated Poverty Hollow Antiques in Lebanon. She enjoyed antiquing, baking, traveling, bingo and not staying home.

According to her wishes, her remains will be cremated. Her ashes will be interred at St. Joseph Cemetery in Lebanon in a private service.

To send flowers to the family or plant a tree in memory of Georgia A. Halasey (McAdams), please visit our Heartfelt Sympathies Store.

Receive notifications about information and event scheduling for Georgia

There are no events scheduled. You can still show your support by sending flowers directly to the family, or planting a memorial tree in memory of Georgia A. Halasey (McAdams).
Visit the Heartfelt Sympathies Store

We encourage you to share your most beloved memories of Georgia here, so that the family and other loved ones can always see it. You can upload cherished photographs, or share your favorite stories, and can even comment on those shared by others. 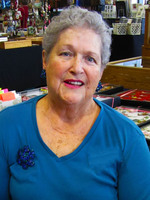